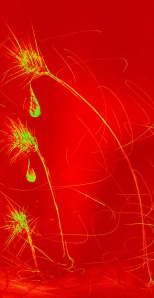 On the 16th of the first month, the day after Unleavened Bread started, the Israelites were to bring a sheaf of new grain to the priest.  This was also “the day after the Sabbath,” or Sunday (Lev. 23:11).  This new grain was the first of the harvest to ripen, the firstfruits.  The priest waved the sheaf before the Lord so the people would be accepted (Lev. 23:11).  These firstfruits were also a pledge that the full harvest to come would be of the same kind and quality as the firstfruits.

First Corinthians 15:20 says, “Christ has indeed been raised from the dead, the firstfruits of those who have fallen asleep.”  Christ was raised on Sunday, the day after Unleavened Bread, the third day after Passover, when He was crucified (1 Cor. 15:3, 4).  Paul goes on to compare death with the planting of seed: “What you sow does not come to life unless it dies.  And as for what you sow—you are not sowing the future body, but only a seed, perhaps of wheat or another grain” (1 Cor. 15:36-37).  Of all the human seeds planted in graves, Christ was the first to sprout, to break ground, to rise above it.  Christ’s resurrection is a pledge that we are accepted and will be raised as well: “For if we have been planted together in the likeness of His death, so we shall also be in the likeness of His resurrection” (Rom. 6:5).

While the resurrection body radically differs from the seed body in form, they are the same in nature.  When a corn kernel is planted, that which sprouts is corn.  The stalk and leaves that push above ground bear little resemblance to the kernel but are nonetheless corn.  And when the plant heads out, it bears an ear full of corn kernels.  From kernel to mature plant, it is corn.  First John 3:9 says God’s seed is in us.  Both now and when we are raised from the dead, we share the divine nature of that seed, which is Christ (Gal. 3:16).

The resurrection body also comes with increase.  A seed is always smaller than the plant that grows from it.  Jesus said of Himself, “I assure you: Unless a grain of wheat falls to the ground and dies, it remains by itself. But if it dies, it produces a large crop” (John 12:24).  The risen Christ is not just the Nazarene brought back to life.  He is a many-membered body composed of all who believe and are baptized into him (1 Cor. 12:12, 13).  We are the increase, the large crop coming from His death.  Similarly, our resurrection bodies will be an increase and harvest of whatever we planted—whether God’s seed or another (John 5:29; Gal. 6:7-8).

I Am the Resurrection

1 Corinthians 15 focuses on our future bodily resurrection.  But resurrection is not first and foremost a bodily reality.  Jesus said, “I am the resurrection and the life. He who believes in me will live, even though he dies; and whoever lives and believes in me will never die” (John 11:25, 26).  Christ is the firstfruits.  As we have said, the old covenant priest waved the firstfruits before the Lord as a representative of the crop to come.  The risen Christ also waved Himself before God.  Because of this, God considers us to have risen from the dead in Christ, and our hearts are infused with resurrection life even now (Eph. 2:6; Rom. 6:10, 8:11).  Again, resurrection is not just about reanimation.  It’s about transformation and increase.  Our changed lives and spiritual growth testify that the transformation of the resurrection is already occurring.  Resurrection sprouts now, in the heart, grows secretly in the soul, then comes to full bloom in the body.  “Therefore, if anyone is in Christ, he is a new creation.  The old has passed away; behold, the new has come” (2 Cor. 5:17)

–Excerpted from my booklet, “Christ in the Feasts”