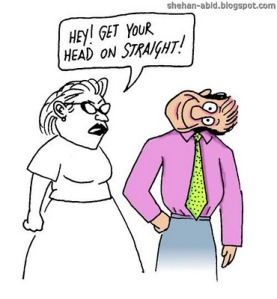 God is Head of all.  No matter how many intermediate heads exist they lead in a chain to God.  The woman is under the man who is under Christ who is under God.  Headship for the woman isn’t limited to the man but God is her ultimate Head just as He is the man’s.  For the woman, the man is AN authority, not THE authority.  Yet we sometimes understand authority this way.  Considering how fallible a man can be it is easy to understand a woman who feels this is a disappointing and unfair arrangement.  The man is subject to Christ, who is perfect, while the woman must submit to a man who is flawed like herself.  Why shouldn’t she be the head?

Paul tells us Adam was formed first (1 Tim. 2:13).  He says again in 1 Corinthians 11:8 that woman came from man.  “Head” in Greek doesn’t just mean one who rules but who is source.  Man’s headship, as Paul sees it, has to do with man being woman’s source.  But again, we can’t say man was THE source.  Eve was taken out of Adam and made of his very substance.  But God removed her and fashioned her.  God remains her ultimate Source and Head.  This is why Paul says, “For as woman came from man, so also man is born of woman.  But everything comes from God” (1 Corinthians 11:11, 12).

Paul also says the woman and not the man was deceived (1 Tim. 2:14).  It is easy to think Paul is saying the woman is inferior for being deceived and was demoted.  But since she was never source, she couldn’t be head, even in a world without sin.  We assume hierarchy began at the fall because God told Eve, “Your desire will be for your husband, and he will rule over you” (Gen. 3:16).  But really, man was already source and head.  What changed at the fall was the nature of headship.  Since man was no longer under Christ his authority became worldly: “You know that those who are regarded as rulers…lord it over them….”  But of His authority, Jesus said, “Whoever wants to become great among you must be slave of all” (Mark 10:42-44).  The quality of the man’s headship changed but the fact of it was not new.  There is hierarchy within God Himself, and its presence in people is part of God’s image in us.

“But everything comes from God” (1 Cor. 11:12).  Since God is ultimate Source and Head, all become one in their relation to His headship.  We are submitted to each other in our various roles, but all ultimately submit to God and are equal in their submission to Him.  “And masters, treat your slaves in the same way.  Do not threaten them, since you know that he who is both their master and yours is in heaven, and there is no favoritism with him” (Eph. 6:9).

After discussing headship in 1 Corinthians 11, Paul moves on to communion.  The death of the Lord, remembered in the bread and cup, is the heart of our submission to each other and to God.  Jesus didn’t cling to His divine form but “made himself nothing, taking the very nature of a servant” (Php. 2:6, 7).  Submission is based on the spirit of Christ, who gave up His equality with God so that God’s will might be done.  Men shouldn’t think their headship is based on inherent superiority.  It is simply by God’s order and choice that man was created first and became head of woman.  Neither does the woman submit because of inherent inferiority.  She submits to her husband because God is her ultimate Head.  She recognizes it is God’s design (and not her husband’s superiority) that she submits to.  She says, “Not my will, but yours be done.”

On the flip side, unless the man submits more deeply to his wife than she to him, he is not in the image of Christ his Head.  After Paul talks about how Christ humbled Himself “even to death on a cross” he says, “Therefore God exalted him to the highest place” (Php. 2:9).  His exaltation is rooted in His self-sacrifice.  In type of this, Adam was put in a deep sleep, a form of death, before Eve was taken from him.

The Lord’s supper brings out our essential union in the Lord.  Whatever our roles—husband, wife, boss, employee, pastor, sheep—we are one in Christ, dependent on the redemption of the cross.  We are equal in our need to eat His flesh and drink His blood (John 6:53-57).  The one New Man—Christ—is greater than any member, and the body is greater than the authority of any member over another.  Ultimately, the headship of any man is instrumental.  It is the ministry of Christ through the man to the woman.  She belongs, not to the man, but to Christ, of Whom she is a member.  “There is no Jew or Greek, slave or free, male or female, for you are all one in Christ Jesus” (Gal. 3:28).