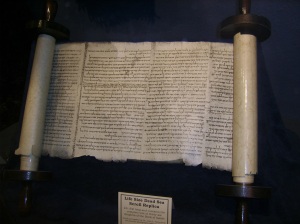 Thus far, we have seen that the law is fulfilled as we live in Christ and He lives in us.  To deepen our appreciation of this point, let’s consider some specific laws, starting with those in the ceremonial/ritual category.

“Keep the Sabbath” is repeated often, perhaps more than any other command.  There was a lot of rest built into the Jewish calendar.

The Sabbath began when God created the world.  He created for six days and rested on the seventh (Gen. 2:3).  The Sabbath was to be a day in which God’s people did no work but experienced the rest of divine completion.

In Christ, God completed all His eternal works.  He completed the work of atonement and a new creation in which righteousness dwells.  To punctuate this, Jesus died on the sixth day of the week, His last words being, “It is finished” (John 19:30, 31).  On the seventh day, the Sabbath, the Lord rested in the tomb, unable to raise Himself; He was completely dependent on God’s work.  By His own glory and power, the Father raised Jesus on the first day of the week (John 20: 1; Rom. 1:4, 6:4).  The Sabbath, then, isn’t fulfilled by going to church on Saturday, Sunday, or any other day of the week.[1]  By its very nature, the Sabbath can’t be fulfilled by any work of man but only by the work of God in Christ.  All we can do to enter that rest is believe and enjoy God’s finished work in Christ (Heb. 4:3-5).

Leviticus 19:6 and 7 say that the fellowship offering “shall be eaten on the day you sacrifice it or on the next day; anything left over until the third day must be burned up.  If any of it is eaten on the third day, it is impure and will not be accepted.”  This is a curious directive and one of the more obscure laws.  Beyond proper food handling and the prevention of food poisoning, God had His Son in mind.  The flesh of Christ’s sacrifice was not to be found on the third day for He was raised from the dead.

When it comes to the moral law, many of us immediately think of the Ten Commandments.  Let’s consider a couple of these commands in light of Christ in us.

“You shall not make for yourself an idol in the form of anything” (Deut. 5:8).

Christ is God’s only image (Col. 1:15).  Because we have been created in Christ, God’s image is in us.  God wishes us to be conformed to the image of His Son (Rom. 8:29).  This doesn’t mean that we are changed.  God doesn’t try to improve our flesh.  His image is in us.  God chisels away what isn’t His image in order to reveal the image within, just as a sculptor removes stone to reveal the statue.  We are God’s workmanship (Eph. 2:10).  If we only refrain from worshipping idols, we haven’t grasped the heart of this commandment.  The fullness of this command is only realized if God’s image—Jesus—is becoming more manifest in us by the workmanship of the Holy Spirit.

In 1 John we are told Cain belonged to the evil one and murdered his brother (1 John 3:12).  John goes on to say that “no murderer has eternal life in him.  This is how we know what love is: Jesus Christ laid down his life for us.  And we ought to lay down our lives for our brothers” (1 John 3:15, 16).  Murder is wrong, not merely because a life has been taken, but because it violates the nature of Christ.  Jesus gave up His life willingly that we might live.  The murderer takes another’s life against their will for selfish ends.  If Jesus lives in us we will not murder but will allow death to work in us that life may work in others (2 Cor. 4:12).  Really, we haven’t comprehended the spirit of this law if we refrain from murdering people but do not fellowship in Christ’s sufferings, becoming like Him in His death (Php. 3:10).

[1] This isn’t to say we should stop meeting for  worship and instruction in the word.  Having regular times of fellowship is practical and necessary for our growth (Heb. 3:13, 10:25).  But we should never think that going to church fulfills the Sabbath command or that God’s favor depends on meeting weekly.

Excerpted from my booklet, “Wonderful Things in Your Law“