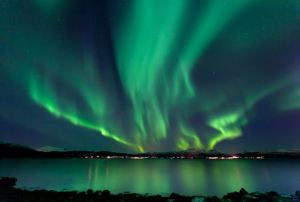 Many waters, without beginning or end. Without surface. It was only depth. It was only inside, not outside. It was not form, only flow. And it danced without feet, an irradiating urge, worshiping ecstatically in the silent music of self-knowledge. It was alone. But it was not alone. There was itself and Itself and ITSELF, flaring out from centers into peripherals that were centers flaring out.  It was alone. Like the beginning and the end shut into a single book, a single word that neither ends nor begins but is an absolute whole: a story told. And this story was noun, and noun was all it was. And this story was verb, and verb was all it was. So with verb and noun it wrote the stars and the planets and the interstellar dust and the rings of Saturn and the orbit of the moon and the atmosphere of the earth and the sun beating down on a lake in June. And it wrote a man and a woman and a love and a race that withered before it bloomed. But that was when, and it wasn’t the beginning, because there was no beginning: it was all in the book and the book was shut and the book was whole. It was only noun. It was not verb. It was only verb. It was not noun. And it burned with a tender violence and danced without feet in itself, a radiating adoration reaching and leaping; flaming out, flaming out, flaming out: wild & beautiful, sweet & docile; the song of songs coursing and pounding through pure, veinless desire: pulsing, urging, worshiping, being. Alone and ALIVE. There was no time. There was only itself—voiceless choirs kaleidoscopically weaving Joy and the most exquisite mystery:  a secret shared between knowing smiles.