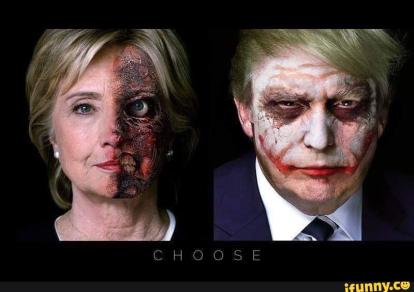 America’s presidential election is…beyond description.  People often say they’re voting for the lesser of two evils. But many see no clear favorite in the race toward lesser evil.  (And what a sad finish line that is).

The picture above captures this feeling.  Hilary Clinton and Donald Trump are imagined as super-villains from “The Dark Knight,” part of a Batman movie trilogy.  Clinton is Two-Face.  This is an apt characterization.  Clinton has been caught lying too many times for the average person’s comfort.  She’s also been the subject of more than one criminal investigation.  Again, too many times for the average American.  Despite all this, she has maintained enough of a facade to be one of two presidential hopefuls.  Wonders never cease.

Then there’s Donald Trump, here styled as the Joker.  And what else can you call a guy who is known for real-estate, reality TV, and really shocking one-liners?  He’s a guy people have trouble taking seriously.  This entire campaign I’ve been waiting for Trump to say, “Just kidding,” and drop out of the race.    His studied lack of decorum and charity is only matched by Clinton’s ability to fake it.

When it comes to politics, it’s generally a race to the bottom.  I am used to hearing people point out all the flaws of the candidate they don’t like while talking up their candidate.  Obvious, documented flaws are deflected because their favored candidate was smeared or misunderstood or…pick your excuse.  On both sides it’s a passionate debate about who is really the villain.

Trump and Clinton have aired more dirty laundry than most candidates in recent memory.  Why were people fighting over the moral high ground?  I have wondered this before: even candidates with no glaring faults are fallen and hampered with sin like everyone else on the planet.  There’s no use trying to prove any person, let alone any politician, is faultless.  It’s a losing argument.  If that’s true even for grade-A candidates, it’s even more true for the rogues’ gallery campaigning now.  The lack of character exhibited by Clinton and Trump just exposes the one-upsmanship on both sides of the isle for the absurdity it always is.

So I asked myself, Why do political discussions become so passionate and personal?  Unable to answer, I asked the Lord.  His answer?  When people argue to prove their candidate is right, they are really arguing to prove that they are right.  The whole thing boils down to self.  Each of us sees ourselves as good people with good judgment.  When our candidate is challenged, our own good character and judgment are what’s really at stake.  To attack my candidate is to attack me.

Now the works of the flesh are obvious: sexual immorality, moral impurity, promiscuity, idolatry, sorcery, hatreds, strife, jealousy,outbursts of anger, selfish ambitions, dissensions, factions, envy, drunkenness, carousing, and anything similar. I tell you about these things in advance—as I told you before—that those who practice such things will not inherit the kingdom of God.

Did you notice that “factions” is in this list?  Christians are good at pointing out that sexual immorality or idolatry will keep you from the kingdom of God.  Do we ever think the way we carry ourselves politically will keep us from the kingdom?

I’m not condemning political activity as such.  I think it’s possible to have political convictions, vote how you want, or run for office if God calls.  At what point does political activity devolve into fleshly factions?  That’s between you and God.  It’s probably different for each person.

Regardless of party preference, God has one answer: the cross.

Now those who belong to Christ Jesus have crucified the flesh with its passions and desires (Gal. 5:24).

If you belong to Christ, the passions that drive factions have been crucified.  If you walk in factions you are not walking in the cross.

So the real choice facing Americans (especially Christians) is not between Clinton and Trump.  It’s between flesh and Spirit; between proving yourself and dying to self.