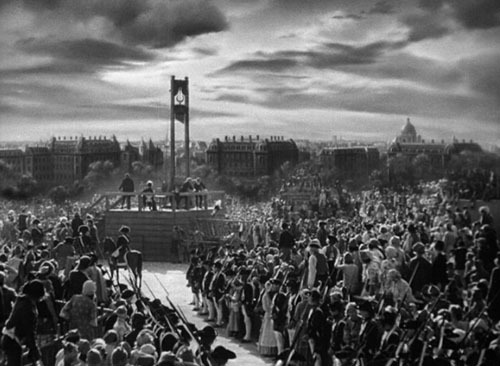 “It was the best of times, it was the worst of times….” This unforgettable phrase opens Dickens’s novel A Tale of Two Cities. Set in England and Paris, A Tale of Two Cities takes place just as the French Revolution gets going. On one side are the French commoners. They are enraged by the economic advantages of the aristocracy and want everyone to be equal. The peasants’ seething mood escalates: aristocrats are wantonly murdered and their estates dissolved; war begins, and Paris is seized by the iron fist of the peasant leaders. All titles are abolished, and the commoners call everyone “citizen” (which sounds uber-creepy juxtaposed with rampant envy and slaughter). Ultimately, the revolutionaries don’t really want equality.   They want power.

On the other side is the aristocracy. Before the revolution, they held all the cards. They enjoyed more food and comforts than they could use while the peasants endured horrid harvests and starved. Dickens captures the indifference of some aristocrats when the Marquis Evremonde runs over a peasant child with his carriage. Instead of showing remorse, the Marquis curses the child and goes his way.

At the center of the plot is Charles Darnay, the Marquis Evremonde’s nephew. Charles lives in England and abhors the way aristocrats like his uncle treat commoners. Revolutionaries arrest Charles when he comes to Paris to see the Marquis. In the spirit of fairness and equality, the revolutionaries sentence Charles to death for a crime his father and uncle committed.

Also central to the story is Sydney Carton, an acquaintance of Darnay’s. He knows Charles because they fell in love with the same girl, Lucy Manette. Sydney isn’t nobility and has a drinking problem. Lucy cares for him but declines his marriage proposal. Sydney has no reason to like Charles. But he is honest enough to recognize his worthlessness compared to Charles’s quality. Social differences aside, Charles and Sydney look A LOT alike. They are practically twins, doppelgangers…

The morning of Charles’s execution, Sydney visits him in prison. He drugs Charles and switches clothing with him. Sydney (posing as Charles) has Charles carried out. The drugged Charles is mistaken for a drunk Sydney. No one is surprised since Sydney is a known lush. Sydney is later executed in Charles’s place.

Prior to this, Sydney wanders the streets of Paris all night. He ponders Darnay’s fate, the revolution, and the guillotine going Ginsu on dissenting necks. Sydney isn’t religious. But words from the Book of Common Prayer rise in his heart: “I am the resurrection and the life, saith the Lord: he that believeth in me, though he were dead, yet shall he live: and whosoever liveth and believeth in me, shall never die.”

Dawn comes to Sydney in more ways than one: “Then, the night, with the moon and the stars, turned pale and died, and for a little while it seemed as if Creation were delivered over to Death’s dominion. But, the glorious sun, rising, seemed to strike those words, that burden of the night, straight and warm to his heart….” Creation’s message of death and resurrection imbues Sydney with purpose and worth. He prays, ending with the words, “I am the resurrection and the life.” This moves him to sacrifice himself for Charles.

What a contrast between Sydney and the revolution. As politically self-righteous factions devour each other, Sydney willingly feeds them his body and blood. As aristocrats and revolutionaries claw and bite to keep what’s theirs, Sydney gives up everything.

Dickens paints such a moving picture of Christ through Sydney Carton. Compared to the love of Jesus, nothing is pure. Whatever your political convictions, they are wrong.   Only Jesus is right. We can bend others to our political will or bend our knees to Jesus. We cannot do both.