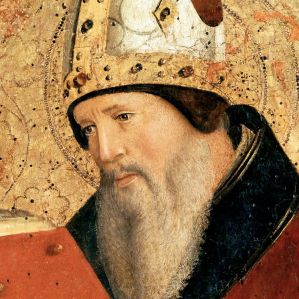 Augustine (354-430 AD) was a bishop in north Africa.  He remains one of the most influential thinkers in church history.  Augustine is known for books like City of God, in which he explained Rome’s fall: Rome typified the city of man which isn’t eternal.  Instead of looking to Rome, Christians look “to the city that has foundations, whose architect and builder is God” (Heb. 11:10).

Augustine also wrote against the teachings of Pelagius.  Pelagius said the fall didn’t change man’s nature; people can keep attain salvation by obeying the law or by faith in Christ.  Augustine countered that all people are slaves of sin because of the fall.  Salvation is the gift of Christ dwelling within as our new nature.  Augustine’s emphasis on grace made him a hero of the Reformation.  Before becoming a reformation leader, Martin Luther was a monk in the Augustinian order.  The mark of Augustine’s theology on Luther is unmistakeable.

Recently, I felt drawn to read Augustine’s Exposition on the Book of Psalms.  The first sentence hooked me: ” ‘Blessed is the man that hath not gone away in the counsel of the ungodly’ (ver. 1). This is to be understood of our Lord Jesus Christ, the Lord Man.”

I think much in the Psalms should be applied to Christ.  New testament writers certainly did this.  Psalm one is often used to encourage better behavior or more Bible reading (Psalm 1:2).  Applying Psalm one to ourselves sets a standard we can’t fulfill.  Only Christ can be what the Psalmist describes.

Below are a few more selections.  Since Augustine exposits all 150 psalms, it’s a huge book.  I haven’t made it very far!  Maybe in a few years I’ll finish 😉

A psalm of David, when he fled from the face of Abessalon his son. 1. The words, “I slept, and took rest; and rose, for the Lord will take me up,” lead us to believe that this Psalm is to be understood as in the Person of Christ; for they sound more applicable to the Passion and Resurrection of our Lord, than to that history in which David’s flight is described from the face of his rebellious son.

This Psalm can be taken as in the Person of Christ another way; which is that whole Christ should speak. I mean by whole, with His body, of which He is the Head, according to the Apostle, who says, “Ye are the body of Christ, and the members.”  He therefore is the Head of this body; […]  In the Prophet then at once, the Church, and her Head […] speaks, “O Lord, how are they multiplied that trouble me! many rise up against me;” wishing to exterminate the Christian name. “Many say unto my soul, There is no salvation for him in his God.” […]  “But Thou, O Lord, art my taker;” in Christ of course. For into that flesh the Church too hath been taken by the Word, “who was made flesh, and dwelt in us;” for that “In heavenly places hath He made us to sit together with Him.” When the Head goes before, the other members will follow; for, “Who shall separate us from the love of Christ?” Justly then does the Church say, “Thou art my taker. My glory;” for she doth not attribute her excellency to herself, seeing that she knoweth by whose grace and mercy she is what she is. “And the lifter up of my head,” of Him, namely, who, “the First-born from the dead,” ascended up into heaven.

“The light of Thy countenance,” saith he, “is stamped on us, O Lord.” […] But he says, “stamped on us,” as a penny is stamped with the king’s image. For man was made after the image and likeness of God, which he defaced by sin: therefore it is his true and eternal good, if by a new birth he be stamped. And I believe this to be the bearing of that which some understand skilfully; I mean, what the Lord said on seeing Caesar’s tribute money, “Render to Caesar the things that are Caesar’s; and to God the things that are God’s.”  As if He had said, In like manner as Caesar exacts from you the impression of his image, so also does God: that as the tribute money is rendered to him, so should the soul to God, illumined and stamped with the light of His countenance. (Ver. 7.) “Thou hast put gladness into my heart.” Gladness then is not to be sought without by them, who, being still heavy in heart, “love vanity, and seek a lie;” but within, where the light of God’s countenance is stamped. For Christ dwelleth in the inner man, as the Apostle says….