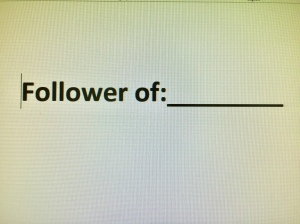 Jerome (345-420 AD) was an early church father, scholar, and monk.  He is probably best known for his translation of the Bible into Latin (known as “The Vulgate” because Latin was the vulgar or common language).

When Jerome was about 30 and a rising academic star, he had a dream that brought his star crashing to earth.  In the dream, Jerome found himself before a divine tribunal.  He was tried for preferring pagan authors (such as the philosopher Cicero) to Christian. The divine judge pronounced this sentence: “You are a follower of Cicero, not of Christ.”  Following this, Jerome ditched pagan studies and high-tailed it into the desert where he lived as a hermit and sought the Lord.

Jerome’s dream has stuck with me over the years.  It’s application goes far beyond Cicero.  If you remove “Cicero” from the sentence pronounced on Jerome, you can fill in the blank any way you like: “You are a follower of ________, not of Christ.”  If you’re thinking I should take the blank out of my own eye first, fair enough (Matt. 7:5).  At times, I have filled in the blank as a barometer of what is most important in my life.

Many things can fill that blank.  Politics are hard to get away from and even harder to be dispassionate about.  Print, radio, television, and internet media make news sources almost omnipresent.  Are your emotions governed by the political goings on each day?  Is your mind caught up in imagined debate with those “across the aisle”?  Perhaps you follow democrats, republicans, or libertarians moreso than Christ.  Whether you identify as a Christian isn’t the point.  Who do you follow?

Relationships can fill the blank many times over.  Are you caught up in who said what (and in telling all your friends about it)?  Are your social-media posts full of passive-aggressive rants? Is each day a one-act drama you can’t escape from?  Is your interpersonal emotional life a pack of nibbling piranhas?  Recognize that your most important relationship is with Jesus.  Follow Him instead of dysfunction. There’s way less drama.

Maybe you’re a follower of a certain minister or theological perspective.  God bless our teachers and ministers.  Without them, the body can’t mature (Eph. 4:11-13).  But at the end of the day, doctrine is an explanation of spiritual things.  In Mere Christianity, CS Lewis reminds us that explanations of the cross are not the same as the Event itself.  We must believe in the Event to be saved; we are not required to believe any explanation of the Event.  Do you follow Jesus or your preferred explanation of Jesus?  Believe it or not, there’s a difference.  No one’s commentary died for them and rose again 😉

I could go on but I think you get the point.  For myself, I want to be a follower of Christ.  Paul says we are slaves of the one we obey (Rom. 6:16).  What is my mind set on?  Do I treasure what is subject to moths, rust, and thieves (Matt. 6:19-21)?  What drives my emotions?  In short, what is the object and focus of my whole self?  I pray the Spirit of the Lord is daily making us followers of Christ instead of some blankety-blank.