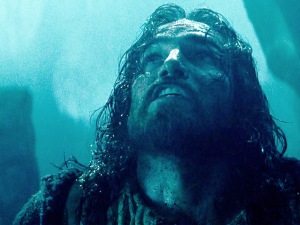 Image from The Passion of the Christ (Mel Gibson, 2004)

In the garden of Gethsemane, tears and bloody sweat dripped from Jesus’s face.  He was praying hard, asking if there was any way out of the cross: “My Father, if it is possible, may this cup be taken from me.  Yet not as I will, but as you will” (Matt. 26:39).  God’s answer was a band of Roman soldiers sent to arrest Him.  Jesus’s “day in court” was more travesty than trial, more lynching than legal.  Under enormous public pressure and the threats of the chief priests, Pilate condemned Jesus to death.  The man from Nazareth was beaten by a gang of guards until His face was unrecognizable (Isaiah 52:14).  What was left of Him was nailed to a cross and hung like bait for wild animals.

Jesus wasn’t surprised by His Father’s answer.  He had been telling His disciples for some time that He must “suffer many things at the hands of the elders, chief priests and teachers of the law” (Matt. 16:21).  God had been showing Him what He would endure through words written in the Old Testament hundreds of years before; words like those in Isaiah: “Yet it was the LORD’s will to crush him and cause him to suffer…the LORD makes his life an offering for sin” (Isaiah 53:10).  Jesus knew what the plan was.  He Himself had given Judas (and also satan) permission to betray Him (John 13:27).  Going forward was His choice as much as the Father’s (John 10:17, 18).

After Adam and Eve fell, God offered the first sacrifice for sin and clothed them with animal skins.  Jesus knew from this that He would be the last sacrifice and would eternally cover God’s damaged image in people.  He also knew He would crush the serpent’s head and fulfill the ancient prophecy about God’s enemy.

But before the fall or the serpent, before anything was created, self-sacrifice was in the heart of God.  It wasn’t in God’s heart because of sin or the problems from which we needed rescuing.  Self-sacrifice was in God’s heart because that is who He is.  God is love, and there is no greater love than laying down your life (1 John 4:16; John 15:13).  Jesus died to show us who God is—not in relationship to our failures or needs but to show us God in and of Himself.  Love, of course, deals with the human condition because of its self-giving nature—it saves from death, forgives, helps the poor, frees from demons, reconciles, and heals.  Jesus died to care for our every need, concern, or weakness.  The cross was, above all, the will of God, who loves us more than Himself.