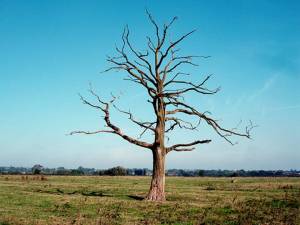 Jesus described the cross as a seed falling into the ground to die; His resurrection would be like a harvest (John 12:24). There is a fruitlessness associated with the cross, a sense of wasted potential.   Nothing about the cross seems successful or productive for the kingdom of God. Jesus was mocked for this as He hung in mid-air, bleeding to death (Matt. 27:42; Mark 15:30). The people and priests treated Him with contempt because He had produced nothing. He was accused of blasphemy and insurrection. Everyone abandoned His sinking ministry.   His failure, along with His body, was sealed by the stone rolled over His tomb. These were His only outward achievements.

Hannah’s childlessness was not merely biological. The Lord kept her from conceiving. Hannah’s inability to produce was a divinely ordained season of knowing the Lord in His suffering and death. She carried barrenness within just as Paul said we carry the dying of Jesus within. This season deepened her relationship with the Lord and enabled her to foreshadow the crucified One.

It was because of Hannah’s fellowship with the Lord that Peninnah taunted her.  Peninnah was productive and fruitful.   She had children.   Hannah produced nothing; she was conformed to the barrenness of the Lord’s death. So Peninnah despised her.

If we walk with God, He will lead us into seasons of knowing Christ in His suffering. He will make us barren and keep us from being productive. We may long to bring forth the Son. Perhaps we are pained because our lack of Christ negatively affects others. Maybe we hope for newness of life where our soul has been entombed in worldliness. Whatever the case, the Lord births no seed of Christ to deliver us. For a time we must endure the aching absence of Him within.

God may give us a desire to nurture His body.   We may have gifts from Him for the church, a calling of some sort. Yet God “puts us on the shelf;” we sit, unused, while others enjoy more opportunities than they can pursue.

There are many ways to experience the fruitlessness of the cross. “Peninnah” usually accompanies these seasons, and not always in the form of another person. We are our own worst enemies. Comparing ourselves with others is as natural as breathing. They are “going places,” we are going nowhere; they are “anointed,” we are a nothing; they impact their community, we scarcely leave a footprint. Such “Peninnah” thoughts may taunt and provoke us to despair.

Other people can and do fill Peninnah’s role when we are spiritually barren. Their attentions aren’t always overt.   Sometimes, who *doesn’t* talk to us is as telling as who does. Peninnah’s taunts require no interaction. Sidelong glances, an air of superiority, and the silent treatment are effective tormentors.

When someone openly antagonizes us, being ignored doesn’t sound so bad.   Patronizing comments, “godly counsel” about why we aren’t successful, things said loud enough to overhear–all these can crumple us like paper. This is something Jesus understands. People laughed at Him, doubted His ministry, and spread rumors (Mark 5:40; Matt. 11:19, 21:23).

When we experience treatment like this, it is an opportunity to know Jesus in a precious way. (Count on it: people aren’t lining up to experience this aspect of Christ. It’s an intimate setting). We desire to share the sorrows of loved ones; we can have this sort of closeness with Jesus. We can know His secret griefs. Peter tells us to appreciate these opportunities, painful as they are, because the Spirit of glory and of God rests on us (1 Peter 4:14).

When “Peninnah” provokes us, it is really the Lord being despised.  It may seem to be about our lack of productivity. But here is the root issue: Jesus is manifesting His suffering in us. Man’s reaction is to elevate himself and treat Jesus with contempt. Though Jesus has become contemptible for our sakes, we treat Him as the one cursed by God (Isaiah 53:4). People reacted this way to the historical cross; they also react this way to the cross working in a person today. If we can remember Whom they reject we will take it less personally and allow Jesus in us to bear their taunts. This frees us in Him to love our enemies and pray for those who persecute us (Matt. 5:44).