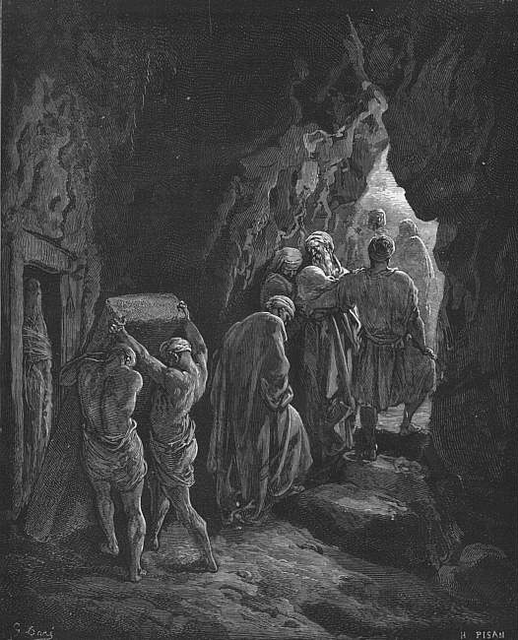 “Burial of Sarah” by Dore

Genesis 23 opens with the death of Sarah. Abraham, being a foreigner, asks the Hittites to sell him the cave at Machpelah for a burial site. The Hittites offer to give Abraham the land because he is “a mighty prince” but Abraham insists on paying the full price (Gen. 23:6, 9, 12-13). Abraham buys the cave and surrounding property at Machpelah for 400 shekels of silver and buries Sarah there. Later, he is buried there himself (Gen. 25:9).

Abraham’s purchase of this land stands out because God already gave him Canaan (Gen. 13:15). Though Abraham possessed the land by promise, he didn’t own any of it in a legal sense; his ownership wasn’t recognized by the inhabitants. Through Sarah’s death and the payment of silver, Abraham’s ownership of Canaan manifested and became legal in this world.

We can see aspects of the cross in Sarah’s death and in Abraham buying the cave at Machpelah. “The earth and everything in it, the world and its inhabitants, belong to the LORD” (Ps. 24). The Psalm is correct in an overall sense. Everything is God’s. Yet He gave people dominion and we forfeited our dominion to the enemy, satan (Gen. 3). In a limited sense, God lost ownership of people and the creation we governed. He became a stranger and foreigner in His own creation (John 1:10-11). This was the state of things until Christ.

Death was the penalty of handing our dominion and creation over to satan (Gen. 2:16-17). Death was the price of buying back people and creation. Jesus, our mighty Prince, paid the full price through His broken body and spilled blood. Abraham also paid the full price for Machpelah in silver. Silver is connected to redemption in the Old Testament (Num. 18:15-16). This price bought God a tomb in the world where sin made Him a foreigner just as Abraham obtained a tomb in Canaan. The Lord now had redemptive ownership of humanity and creation.

Abraham purchased a tomb for his bride, Sarah. As we said, it was also his tomb. The tomb Jesus purchased with His blood was also for His bride. All who are baptized into Christ are baptized into His death: “Therefore we were buried with Him by baptism into death, in order that, just as Christ was raised from the dead by the glory of the Father, so we too may walk in newness of life” (Rom. 6:3-4). The death and burial of Christ is where we are joined to Him. The tomb is the locus of God’s redemptive purchase, the place we and creation again become His.

The joining of God and man through Christ’s death is also pictured in that Sarah died at Hebron. Hebron means, “alliance” or “association.” It is a place where unions are forged. Generations later, all the tribes of Israel would unite with David at Hebron. At that time they said, “Here we are, your own flesh and blood” (2 Sam. 5:1). We too are the flesh and blood of Christ through His death, burial, and resurrection. Regardless of our tribe in this world, we are one body in Him. Christ is the Hebron of God. He is the alliance, association, and union God planned “for the administration of the days of fulfillment–to bring everything together in the Messiah, both things in heaven and things on earth in Him” (Eph. 1:10).