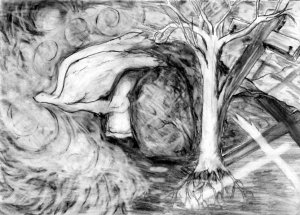 Death and resurrection cannot be separated.  This is so obvious it seems like a platitude.  Often our words and thoughts divide these into separate categories.  For the sake of clarity it’s sometimes helpful to consider them separately.  But it’s disastrous in real life.  Perhaps we are too used to treating death and resurrection as subjects.  Perhaps it is tidier to deal in false dichotomies than to face the fullness of Christ.  Whole theologies are based on marginalizing death or resurrection.  Protestants avoid crucifixes.  Prosperity teachers preach 3 John 2 but not Philippians 4:12.  Ascetics fast but don’t show up to the wedding feast.  The early church staved off attempts to deny Christ’s divinity or humanity.  I wonder: is diminishing Christ’s death or resurrection any less serious?

It’s easy for prejudices to hide when we don’t think them out to their conclusions.  When we do, we end up in absurdities.  For instance, if resurrection is independent of death, then what is one raised out of?  There is no resurrection other than resurrection from the dead.  And if we favor death Paul says, “if Christ has not been raised, our preaching is useless and so is your faith” (1 Cor. 15:14).  In Christ, there is no death except unto resurrection.

Death and resurrection are not subjects at all but a Person who died and raised—Jesus the Lord.  We cannot understand them except in Him, and we cannot have fellowship with Him while minimizing one or the other.  He is the Life—“which we have looked at and our hands have touched”—that suffered and died on the cross (1 John 1:1).  He is the Lamb who reigns yet was slain (Rev. 5:6).  The Risen One invites us to touch His wounds (John 20:27).  The Seed falls into the ground and dies so a harvest will grow (John 12:24).  We eat the broken body and poured out blood of Jesus and enter into life through that communion.  What a lie it is when we dissect Christ and subject His death and resurrection to our preferences.

Hebrews 11 is a passage known to many as the faith chapter. Toward the end, the author gives a rapid-fire list of things accomplished by faith.  As one reads, two distinct groups emerge.  Verses 11:33-35 talk of people who conquered, walked in victory, lived prosperously, and saw their dead raised.  The next three verses deal with those who were mocked, tortured, killed, and were destitute.  Yet verse 39 says, “These were all commended for their faith….”

How could living by faith lead to such disparate experiences?  To make sense of this we need to remember not just that these saints had faith but whom their faith was in—the one who would die and rise again.  Perhaps they didn’t believe in Jesus explicitly but they did believe through types and shadows: Abel’s shed blood, Abram receiving Isaac back from the dead, Joseph raised to Pharaoh’s right hand, the Passover lamb.  Clearly, the power of Christ’s resurrection is manifest through the faith of those in verses 11:33-35; His suffering and death are revealed in the faith of those in verses 11:36-38.  If we live by faith, we will know Jesus in the power of His resurrection, the fellowship of His sufferings, and in His death (Php. 3:10).

We often equate faith with outward circumstances, and we judge others whose situations are different from our own.  Some of us think we’re not living by faith unless we are enduring some personal crisis.  We might look at a wealthy person and assume there’s no way for them to trust God.  Others think faith always conquers and never endures; people lack faith if they experience a season of loss, don’t get a promotion they pray for, or if God doesn’t heal them physically.  Both of these positions are symptomatic of a Christianity which divorces death and resurrection from the person of Christ and reduces them to subjects or historical events.

Eternal life is not believing the right things but believing in Him who died and rose again.  It is following the Lamb wherever He goes, whether into the tomb or out of it (Rev. 14:4).  It is sharing in His anointing and in His anointing for burial (Acts 10:38; Mark 14:3-9).  “If we live, we live to the Lord; and if we die, we die to the Lord.  So, whether we live or die, we belong to the Lord.  For this very reason, Christ died and returned to life so that he might be the Lord of both the dead and the living.  You, then, why do you judge your brother?” (Rom. 14:8-10).  I pray the Holy Spirit will lead us into all truth through the testimony of Jesus (John 15:26, 16:13).